Two questions are now driving my efforts in building a resource…primarily for parents:

1. What if we approached drivers education the way 30 out of 50 states approach sex education?

2. What if we approached culinary arts (or just plain ol’ teaching our kids how to cook) the way 30 out of 50 states approach sex education?

Soooo…last week, I was asked a question. It was (to me) a very interesting question, actually…and one that, turns out, is a quite common question.

There is an age-old joke about how women have a smell “down there” ~ frequently made by male partners who fail to realize they have a smell of their own “down there” that is not altogether different. I wrote about this point before, quite a while ago, when I asked my husband (and a few trusted male friends) if they could smell themselves. Their answers were consistently, “No,” and I couldn’t help but laugh…because as many a heterosexual, sexually active woman can verify…men you do have a smell of your own…and frankly, it’s not altogether different from our musky smell fragrance. Now, I will grant that…if a particular smell is beyond the normal “musky” smell (meaning, if the age-old joke about fish) actually smells like fish, then one or both (or multiple) partner/s probably should get checked out by a doctor to rule out or confirm/treat a sexually transmitted infection (STI).

Rule out? Yes…rule out. Because while an unusual aroma wafting from the holiest of holies might be an indication of an STI…it also might not be. As noted at the beginning here, I received a question that is very interesting (at least to me) that is actually a very common question…and it has to do with penis-in-vagina (PIV) sexual intercourse during or shortly following menstruation. The question asked was (paraphrased), when my husband and I have sex right after my period has ended, there’s this really godawful smell…is that normal? And…the cynics among us would -based on anecdotal evidence- assume that one or the other of the married partners might be carrying an STI…or, as one common non-STI answer might suggest, the female partner might have bacterial vaginosis (BV). No, BV is not actually an STI…and yes, it is very common among women of childbearing years…and it is an infection/condition caused by an overgrowth of normal bacteria that exists in the vagina. blahblahblah…it’s normal…

Once I stopped laughing (and once visions of pH sticks had cleared my head), I set to the business of digging (*cough*) a bit more to find “more serious” answers –meaning, here, citations, because I don’t expect you to simply take my word for anything– to supplement the comments and punchlines that were rattling around my head.

First off…fermenting. When I think of fermenting…generally…I’m thinking about food preparation. This time of year now, I do a bit of pickling and fermenting of foods in preparation for winter. 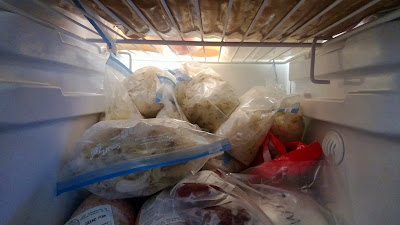 See that mess of freezer bags? That is about…oh, a dozen or so…bags of sauerkraut that I’ve prepared for the coming winter. And more to the point… 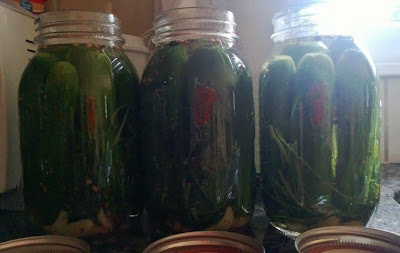 …(*cough*)…with many thanks to my VermAunt, I’ve taken a liking to quick pickling. Lots of phalluses in that image, eh?

What’s your point, Denise? Okay, okay…fine…my point is that foods ferment in similar ways that other…oh, I guess fluids is what we’re discussing here…ferment. A change in the pH balance of those foods fluids. Generally speaking, I don’t pH test foods before I put them through a pickling process…I simply follow a standard recipe. I haven’t attempted the art of fermentation with low acid things, because I would probably have to invest in pH test strips and a whole new recipe book in order to ensure that I don’t get (or give my family) something like botulism. But the point is, pH balance plays a HUGE role in things that ferment…including bodily fluids…including said bodily fluids that exist both in the vagina AND in the penis. On the one hand, in very real ways, we are what we eat…except that (and on the other hand), some of these matters are simply biological realities as part of being members of the animal kingdom.

I mention the point about being animals before moving on because, well…most animals use their sense of smell for their very survival. We human animals seem to have really lost a bit of that sense, except for a few pointed things. We take for granted exactly how primal…visceral…fundamentally instinctive our sense of smell actually is. A smell can snap us back to a childhood moment (in wonderful ways at times, and sometimes in downright emotionally triggering ways)…a smell can be reminiscent, a smell can make our mouths water…and -as pertinent here- serve as a quick biological warning that something is off. By “off,” I don’t mean necessarily bad or dangerous…just off.

As in…pH balance is off-kilter. I read an article in the Jamaica Observer, and was surprised to see this actual topic right there…and written quite plainly. The focus was strictly vaginal smells throughout the menstrual cycle, and the pointed note that just after a period, the smell gets funky. And it does. That is normal. As the article also notes (and this is something I’ve written about many times), women need to leave it the fuck alone. Short of getting medically screened (again, to ensure no BV is up in there…or some other bit of bacteria)…the vagina cleans itself out as part of the cyclic process. There is an entire feminine hygiene industry out there making profits on eliminating smells…and making matters far worse. I remember my mother preaching about the wonders of vinegar/water douching…but as an adult, and thinking on the process of fermenting foods…I can’t help but wonder — how do you know you have the correct pH balance in the douche itself (I don’t give a good goddamn, either, about Massengil technology, come to this, because…), and for that matter, how do you know what the precise pH balance is up in your vagina? (And…to drive the point home, I also remember my mother talking about smelling like salad dressing for days after douching.)

Of course, for women truly concerned about their wafting aromas…there are plenty of message boards filled with information…but much of the information falls into the category of Things You Can Never Unsee…(and I’m only sharing the more tame ones I encountered)…and there are a few really terrific informative websites you can go to and read if you like, including this one, BUT…all of those pages focus on only ONE HALF of the equation.

There is another half. And that, gentle reader, is (for my heterosexual readers) your male sexual partner. Like it or not, my dear male friends, the pH balance in your dicks also contributes to this wonderment of post-menstrual, post-coital aroma. You can look at your female partner all you like and say, “Eww, what’s that smell?!” (and thank you, guys, for getting THAT song stuck in my head!)…but you’re gonna have to own up to something. Your ejaculate isn’t without its own contributing factors to that smell. See, the vagina isn’t a vacuum; neither is it lined with teflon. Meaning, what you put into it will -at some point- come out…but it doesn’t simply slide right off like something cooked on a teflon-coated frying pan. And for all the conversational avoidance of this particularly sticky topic, it also seems to be a very common topic of concern for men (and their partners)…as seen here and here and here and here…and into other things I’m not linking that also fall into the category of Things You Can Never Unsee….right along with the all-too-common “Are You Circumcised?” bullshit question that raises my hackles and motivates me even more to get sex ed information out to parents about male children and the importance of recognition that penile hygiene (circumcised or not) is a distinct part of sex education for young boys…just as much as vaginal hygiene is a distinct part of sex education for young girls…but REALLY, parents need that particular education.

In any case…my overarching answer to the question of when my husband and I have sex right after my period has ended, there’s this really godawful smell…is that normal? ~ ruling out all other things…YES, that smell is TOTALLY normal. Particularly as we get older, and our hormonal balances (yes, in both women AND men) change. YES, certain bodily fragrances become stronger…and it is also quite possible that our sense of smell becomes more acute as we get older, and our other senses begin to gradually diminish as a normal aging process. Combine all these things and you’ve got a cocktail from…(*cough*)…well, I think you’ve got the idea.