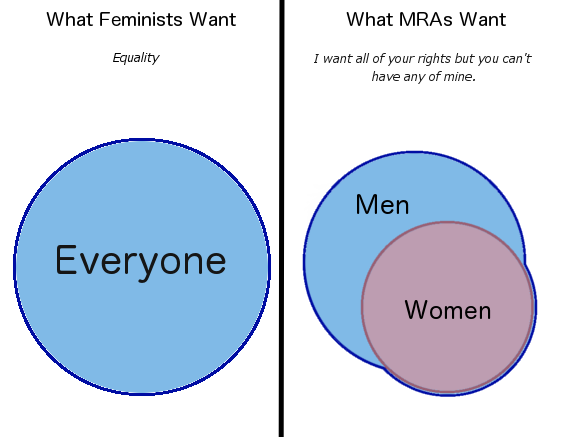 By now, I’m sure you’ve heard about the Isla Vista massacre. I predicted, when I heard the news, that within two days of the incident, there would be Men’s Rights Activists (MRAs) declaring the shooter (whose name I don’t care enough about to give more attention to) a “hero.”

Of course…cue the outrage machine…many of us familiar with the altogether too obvious direction the discussion would go were fully prepared for and not in the least surprised by Teabag reactions (including from elected public servants), all of the “justifications” and “distancing” by the different groupings in that realm (to include the full spectrum of PUA-MGTOW-MRA…and don’t get me started on the so-called “Manhood Academy”). And, of course…the expected response for why all of those “justifications” are wrong. Yeah, yeah…second verse same as the first. Let the dance begin again…this is one of those areas I happen to agree with Michael Moore.

One friend of mine has expressed a desire to remain neutral. A desire to take people on an individual basis. I totally get that. This friend has a rather pertinent history, connected familial history, with Nazi Germany…and her hesitance to wrap around the fuller picture I’ve not been able to clearly show her is completely understandable. Completely. She and I have had a long, drawn-out discussion…where I had to simply accept what the (present) conclusion is in the conversation…which is: Sometimes the obvious simply isn’t…right up until it is. And…that’s okay. I haven’t given up…because this friend is extremely intelligent, I respect her tremendously…and while I may not be presently conveying what it is I’m trying to point out, I also understand that none of us can “make” another person see…we can only show the way to seeing. People have to see for themselves. *shrugs and smiles*

In a separate conversation, though…well…let me simply share it with you (with the understanding of anonymity other than myself:)

JS: By the way, you wanna hear a funny?

JS: Heh… funny as in ironic. It’s really not that amusing. lol

Me: Fair enough…I’ll take it. (feeling as though I’ve been duly warned LOL)

JS: The very FIRST time I used the ‘net on a regular basis was when [JS’ spouse] ex started *hammering* us on child support – I went to the college library to see if I could research the laws. And in the course of searching, you’ll never guess where I stumbled into.

Me: …? [already suspecting the answer]

JS: First internet forums I ever posted on were MRA forums. And, being in the position I was, I was welcomed with open arms.

Me: That is so not surprising. See…I *get* some of the rationale behind THAT facet of MRA. Many men ARE unjustly and unfairly affected by child support regulations. But that only goes so far. I want to see equity for noncustodial fathers, of course…most feminists do. But they ignore the history of WHY those child support regulations were put into place. I think of my grandmother immediately.

JS: That I was openly welcomed, no. That I’d wind up there at ALL, though… lol.

Oh, I SO fucking understand. My dad fucked us constantly, checks were always late and such, and they were our ONLY income at the time. [separate but connected commentary not pertinent to the MRA portion of discussion]

Me: *nodding* The pushback BY MRAs is in direct response to being held accountable in a way that was historically unprecedented…and there is an abiding resentment that — how DARE you hold me accountable?! I am MAN.

Which, incidentally, shines through in yesterday’s blog entry and what I dealt with with the ex-asshole.

JS: Yep. And I see it in how [daughter’s ex] acts as far as [daughter] and [grandson] are concerned. Though to be fair, in some ways the Hispanic culture is an MRA wet dream.

Me: Tell me ABOUT it. Remember…my dad.

Me: Yeah…my dad…even as forward thinking as he is in *some* ways…? Hrrrmmmph…he KNOWS the shit I have dealt with with St. Bea. When I told him about the arrearages (this was about a year ago)…he ACTUALLY said he thought I sounded just like a greedy woman trying to take more and more (in the context of a servicemember). My jaw dropped, and I’ve never said anything about it again, for fear I might just blow up on him.

Me: Yeah. Tell me about it. There are some things I’ve refused to talk about openly because they are infuriating, and they put my dad in a VERY bad light…deservedly so.

The pervasiveness of the MRA and other “Men’s Rights” movement goes well beyond Friday’s shooting…and the problem is not the violence, in and of itself. The danger in the movement — at its logical conclusion IS the violence…but the more immediate problems are more insidiously problematic than the potential for something like what happened in Isla Vista.

I mentioned my dad. And what he said to me when I mentioned what I am doing to hold St. Bea accountable for what he is responsible for (and what he has been failing to live up to). My dad actually told me I sounded like a “greedy woman” — even knowing the situation with St. Bea. My dad is part of a much larger cohort of men (and women who support their position) that 1965 was the year of the “Downfall of Western Morality” — you know, the year that the birth control pill became legal and women could self-determine as far as parenthood. This is a man who really and truly wants (and advocates) for his daughters and granddaughters to pursue higher education so that they never have to depend/rely on anyone (“a man” is his phrasing), while at the same time continuing to insist upon male superiority…and is deeply resentful of ANY challenge to that BY women…to include his daughter. (That would be me.)

This entire idea is directly connected with formalized sex education in the United States…how it is organized in terms of pregnancy prevention, which means it is organized by gender right off the bat…and connected with shame…with WOMEN being the ones who, by that logic, “should be ashamed” — no matter what we do, regardless. No discussion presently exists (which I am working to build as I write this) to discuss communication and teaching of boundaries (to girls AND boys) within the frame of early childhood sex education, alongside anatomically correct genital terminology and basic hygiene. These are ideas that MRAs challenge directly and vociferously…and in the extreme, violently (just look up domestic violence statistics and really think about it)…because why? Because of the idea that they are superior…that they “should” have their entitled privilege because they possess a penis.

With that, Happy Hump Day!

As you may (or may not) know, my aim for Weird Sex Ed is (and has long been) to become a nonprofit organization…to serve the mission detailed in this website. I have not updated the Mission page here, even while the formal business mission has been updated within an actionable business plan for the express purposes of launching WSE as a nonprofit organization.

Just as an update here, as of yesterday, several of the formal steps to reach the aim of becoming a nonprofit have been taken. This is, admittedly, something of a lengthy process with an extraordinary amount of paperwork…but I am working my way through the process. I will update the blog here as information of interest becomes available.