Updating the blog here to pull old entries from the pros/e/yes archives…in their original order. This project is simply a unification of my personal blog (with a LOT of NSFW entries) and my professional blog.

First, gotta pimp @Bedsider! I am a longtime fan, and have followed in tumblr & twitter for ages over in my various ProsePetals pages. When creating @WeirdSexEd, I admit, I forgot what a serious pain in the ass building a followership can be. *sigh* So I’m going through that now…and my aim is to avoid some of the tactics I’ve seen in some others…allowing spambots and such to falsely self-promote. I really want @WeirdSexEd, and its respective website, blog, and facebook pages to grow organically — with and by people who are sincerely interested in connection and interaction.

This doesn’t mean that I, ProsePetals, am any *different* from Dr. Weirdz…lol. I’m SO not. I’m still the same Denise I’ve always been…just with a shiny new title. I still enjoy being silly, goofing off, telling raunchy & ribald jokes, promoting artists and scholars, encouraging and building people up, all that. In that, remembering @Bedsider was SO refreshing last night. Especially when I saw this… 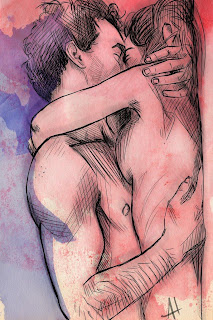 Of course, seeing as it’s Hump Day…and stormy weather is on the horizon…I am having a few internal lightning flashes ~ but those are mine -personally- and I’m disinclined to share.

What I will share, and what a very small handful of people have been told about (and even, in part, shared with) is one of the two big projects I’m currently working on. I made a point of purchasing A.N. Roquelaure’s (Anne Rice’s) Beauty trilogy. It’s been more than 20 years since I read it, and I wanted to refresh my memory…because when I was in my early 20s, the books were eye-opening to me. I’ve started re-reading…and I can say, fairly, that I’m not finding them quite as satisfying as I did when I was much younger. This is, in NO way, a dig on Anne Rice, or her skills as a writer. She is a lovely writer, with rich and beautiful detail…and a lot of flowery descriptions that she is honest enough to admit is deliberate fairy tale fantasy built into erotica. I admire her honesty about that. 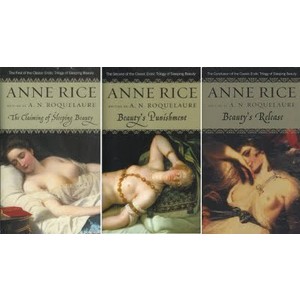 What bugs me, and what I’m not finding in erotica is something outside the “pretty” fantasy, in terms of real bodies, less-than-always graceful sex & slobbing, orgasms that aren’t simultaneous or necessarily earth-shattering…I’m not finding real people with real bodies and real sex the way it is, rather than how romance novels and erotica portray it. This is not to suggest that the fantasy is bad or negative…it’s not. Put it in perspective, though. For people who read these stories, and expect to have that type of sex routinely…I feel like they’re setting themselves up for unnecessary disappointment.

So…because I see something I perceive to be missing from erotica, I’m seeking to fill that void with my own ideas and writings. I am not ready to share any of that story here, and probably won’t be until what I’m writing is actually ready to be published. But I am sharing the mention here, on this last Hump Day of January 2013, because it is in the forefront of my thoughts today, and what I am setting about to work on later this afternoon.

With that, Happy Hump Day!